Can you GRILL it? Yes you can!

Most fruits & veggies can be grilled using indirect, medium heat. Try grilling some delicious seasonal produce (if it’s local, even better!) this weekend! 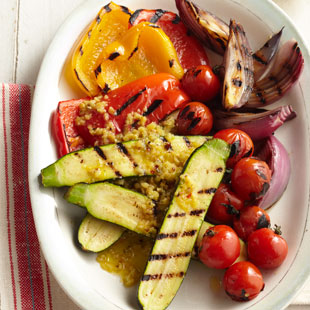 Cut into 1 inch wide wedges and discard seeds. Removing the peel is optional. Can also cut melon into cubed pieces and place on skewers. Cook for 5 to 7 minutes until hot throughout, Turn frequently and lightly baste with melted butter to prevent sticking.

Cut peaches in half lengthwise and remove the pit. Lightly coat peaches with melted butter. Cook for 8 to 10 minutes until fruit is hot through-out. Turn once through cooking time.

Cut peppers lengthwise down the middle. Cut out stem, seeds, and white rib areas. Leave in halves or cut to desired size. If cut to small pieces, place them on a skewer for better control in turning them. Brush peppers with oil before placing on the grill. Cook for 6 to 10 minutes, directly over medium heat. Turn once through cooking. Grill peppers until they are heated through and are beginning to shrivel. Peppers should be crisp ten-der.

Leave peppers whole. Coat with oil. Cook for 4 to 6 minutes. Turn once throughout cooking time. After Grilling: Place in a paper bag and close tight. Allow peppers to steam in bag 10 to 15 minutes. Remove from bag, peel skins with a paring knife and then remove stems and seeds. Cut to de-sired size.

Pull back husks but do not remove. Remove silk, then fold husks back up on corn, and tie with kitchen twine. Soak corn and husks in water for 1 to 3 hours and drain before grilling. Cook for 20 to 30 minutes over medium coals. Turn frequently throughout cooking time. Corn is done when steam is visible.

Sweet Corn (out of husks)

Remove all the husk and corn silk. Rinse corn and pat dry. Cook for 10 to 12 minutes over medium coals. Brush corn with butter and turn frequently. Corn is done when kernels have turned golden brown.

Trim ends off eggplant. Slice large eggplant crosswise and if shorter, cut them lengthwise into 1/2 inch thick pieces. Or if placing on a skewer, cut into 1/2 inch squares. Coat pieces with oil. Cook for 15 to 20 minutes, turning every 5 minutes. Cook until the middle is tender

Slice summer squash lengthwise in half. Brush both sides with oil. Cook squash until nicely browned and tender when pierced with the tip of a knife.