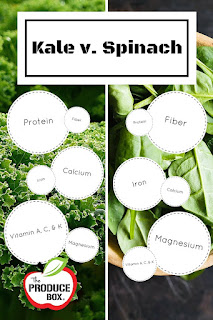 We all know that kale and spinach are both great for you, but we wanted to have these leafy greens face off to see which one is the better choice. Read below and let us know what you think!
Fiber: Although both have fiber, spinach contains slightly more fiber than kale does.
Protein/Iron: Kale has more protein than spinach, but spinach has more iron than kale.
Calcium: Kale wins here, coming in with more calcium per serving than spinach.
Magnesium: Spinach takes the prize for being higher in magnesium than kale.
Vitamin C: Kale has almost four times more vitamin C than spinach!
Vitamin A: Both kale and spinach have an incredible amount of vitamin A, but while spinach has about 400% of your recommended daily value, kale wins here because it has over 650%!!!
Vitamin K: The same thing goes for vitamin K – both veggies have a huge amount of Vitamin K but kale wins here with over 900% of your recommended daily amount!!!
So when facing off – both are great for you, just as we suspected. In comparison, kale has more nutrients, especially vitamins C, A, and K. However, if you’re looking for more fiber, iron, and magnesium, opt for spinach. Regardless, either one is a great choice in your Produce Box for maintaining cardiovascular and bone health as well as preventing diseases through a healthy, nutritious diet.
As far as taste, kale can tend to be more bitter than spinach, but also holds its shape better in cooking.
Our choice? It’s a TIE so EAT BOTH! Here are some of our favorite recipes that incorporate both kale and spinach:
Kale and Spinach Pesto
Sautéed Kale and Spinach
Spinach and Kale Bites
Post Views: 1,592