One of the many non-profits we have a relationship with is the Food Bank of Central and Eastern NC. They serve a huge area (34 counties!) and The Produce Box donates several pallets of fresh produce each week which the Food Bank makes available to the individuals and families served by its community partners. 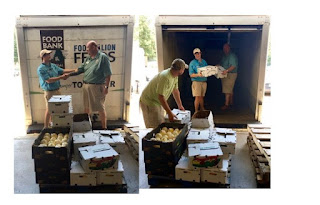 Jennifer Caslin, the Communications Supervisor for the Food Bank, shares how our partnership
started, “The relationship began when one of the TPB team members noticed that there was extra produce going to waste each week and wanted to find a solution. He called and we chatted about the great things The Produce Box was doing and we started picking up extra produce 1-2 times a week. It has been a great partnership ever since!”

“In fiscal year 2015-2016, our donors [like The Produce Box] enabled the Food Bank to distribute more than 22 million pounds of produce.”

The Food Bank helps satisfy a serious need in our area. Jennifer says, “Hunger is a very serious issue in our community. There are nearly 650,000 individuals in our service area who live in food insecure households. This means these folks do not have consistent access to enough food, especially healthy food. 212,460 of those are children. It’s especially difficult for children to learn and grow without a proper diet. Additionally, 45,505 seniors are living at or below the poverty level. There are still many people who cannot make their budget stretch through the end of the month.”
Your Produce Box membership makes it possible to help the hungry in NC. If you want to do even more, when you purchase your Box each week, members can also support the Food Bank by:
1. Donating funds. For every $1 donated, the Food Bank can provide 5 meals or $10 worth of food.
2. Donating food. Hold a food drive or pick up items at the store and drop them by one of the six branches.
3. Donating time. Volunteer at one of the branches located in the following cities: Durham, Greenville, New Bern, Raleigh, Sandhills, and Wilmington.
For more information: foodbankcenc.org/volunteer
Post Views: 891